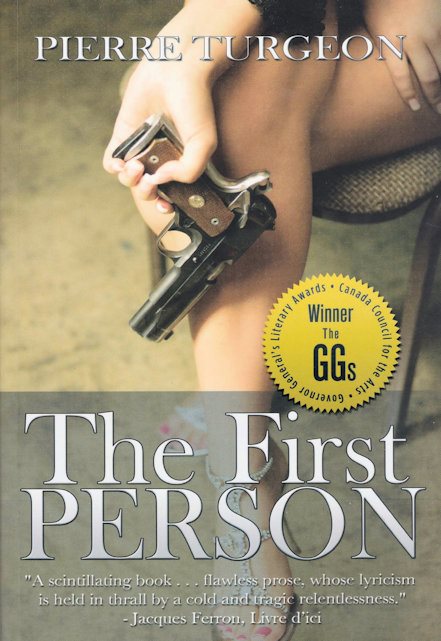 The First Person Cogito, 2020 – In The First Person, a disillusioned computer programmer working for the police has decided to erase his identity. We do not know why. Leaving his old life behind, the man becomes a private detective in Los Angeles under a new, forged identity. He is hired to find a local gangster’s unfaithful wife, but after locating the woman, he falls in love with her. The pair plans to reunite after he returns her and collects his fee, but their plans are shortcircuited by her husband, who punishes her cruelly for her betrayals. Devastated, the detective exacts his revenge. But soon, trapped by his own manipulations, he slowly falls into a mystic quest that redefines his self-image and world view. Written in the first person, the book explores, through the main character’s eyes, his tortured mind, and depicts, with carefully chosen words, the emptiness of his existence and his lack of real emotion. The First Person has been critically praised as an account of one man’s systematic destruction of his own personality.

REVIEWS: Antonioni admirers take note – I admit that the most interesting thing I found about this book was the premise; a man, frustrated with his humdrum identity, assumes that of Mark Frechette. Frechette, as the novel reminds us, was the young male actor who starred in Antonioni’s ZABRISKIE POINT; he became somewhat of a revolutionary, or at the very least a criminal, after the making of the film, and was involved in bank holdups (sorry, don’t recall how many). He defended his actions in radical terms. He was arrested and sent to prison, where he tried to get several social programs going to better the life of inmates; he was a little more outspoken than was safe for him and was eventually found murdered in a weight room. All this is true, and a rather fascinating bit of recent history, particularly in that the making of the film probably had a lot to do with Frechette’s choices in later life — life imitating art and all that. It’s even more interesting that someone should then, years later, write a novel that has its main character attempting to hide under Frechette’s name. The swapping-of-identity theme — man seeking freedom from his former self, while pursued by his family — is also, of course, familiar to Antonioni fans, as a device exploited very effectively in THE PASSENGER. Alas, now that I’m hungry to reexplore it, it’s out of print. I *think* other people would find it interesting, tho’… Y’gotta admit, the premise is quite something. Allan MacInnis – Amazon.com.  “Pierre Turgeon has made a beautiful book, sparkling on a black background. A flawless prose, whose lyricism remains subdued by a cold and tragic determination, is surrounded by a deadly solitude like the pyramids of Egypt.” Jacques Ferron, Livres d’ici. –  “The First Person is at the same time a detective novel, a vertiginous descent into the existential void, a hallucinating portrait of what tomorrow’s world could be, if tomorrow there is, it seems to me, also a kind of sad poem, a growing economy of language that tends towards silence, inscribing in the sense as a derisory provocation, the very negation of meaning.” Réginald Martel, La Presse. 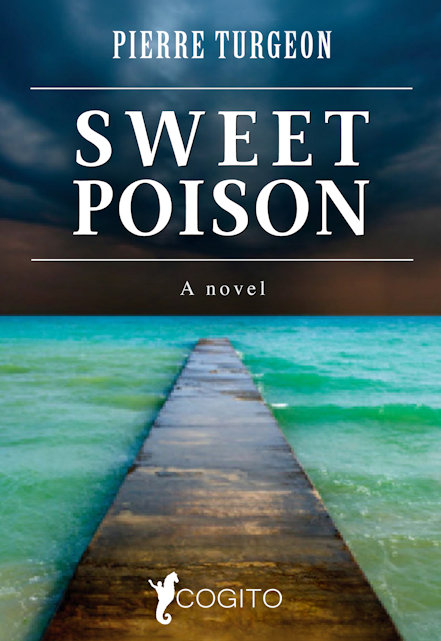 Sweet Poison Cogito, 2020 – This is the story of the rise and fall of a middle-class family, destroyed by its legacy of greed and hatred. The hero survives only by learning the bitter truth about himself and his family.

REVIEW: “Pierre Turgeon makes a stunning entrance into our literature. There are few writers from here who could not envy him his extraordinary mastery of the art of writing. Language more than correct, very rich vocabulary, sober and clear style, finesse of psychological observation, variety and fantasy of imagination, depth of vision of the world. Turgeon has all these qualities and more. We should pay him a life annuity and condemn him to write for as long as possible.” Réginald Martel, La Presse. 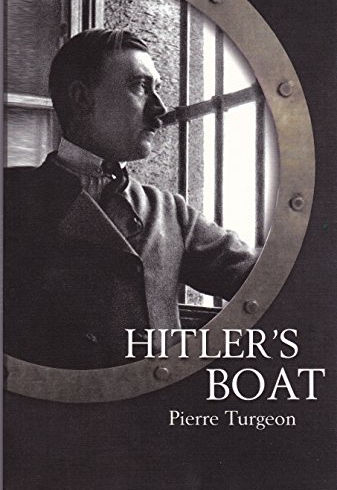 Hitler’s Boat Cogito, 2020 – Here is an astonishing love story that unfolds against the backdrop of a big and small story. A troubling book from beginning to end. Berlin, 1940. Seduced by a German woman and Hitler’s promise to guarantee Quebec’s independence, a Montreal journalist lends his voice to Nazi propaganda. Forty years later, Christophe Chénier discovers that he is the son of a singular man who spared Churchill’s life and played a decisive role in the Führer’s fate. Traitor or hero? Who was the enigmatic Lizbeth, his mother? The answer may lie on board the Helgoland, the armoured sailing ship that was to rescue the Führer from his enemies, now moored in the Bay of Chaleur. Christophe Chénier embarks on a perilous journey in search of the dead who gave him life. A fascinating delirium. A dazzling book.

REVIEWS: ¨The novelty of Hitler’s Boat is twofold. On the one hand, the retro elements which are opposed in the story are German and Quebecois, on the other hand, they do not animate a drama but a spy fantasy. The playfulness carried by the style serves as a counterpoint to the depth of the theme and gives the novel its own originality.” Gabrielle Pascal, Québec Français. “These are perfect pages in terms of style, in terms of verisimilitude too, whose limits are always those of writing. The plot, the relationships between the characters, the confused images of history and fiction, all of this is so dense that I don’t see what the author could have added or subtracted from it.” Réginald Martel, La Presse 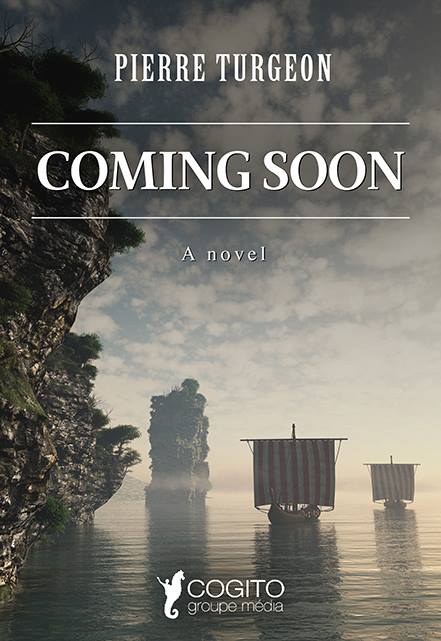 Coming Soon Cogito, 2020 – In Coming Soon, the focus of attention is political rather than social. A war film is being made on the streets of Montreal. But the events that take place – do they exist only on film or are they real? This is the central question of the novel, which gives an answer strong and clear enough to leave an indelible mark on its world, and on ours.

REVIEW: “Never will one have read a book as violent and as restrained… In a classic prose because it alone allowed him to play, Turgeon lies from the first to the last page, pretends to look for the assassin he knows well because he is in each one of us like the smothered and drowned violence of our taverns.” Jacques Godbout, L’actualité.” 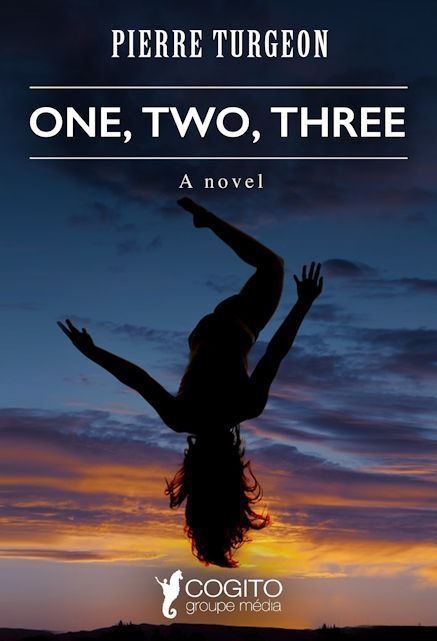 One, Two, Three Cogito, 2020 – A journalist gives himself a double professional mission: a paper and an article on the closing of the Domtar lime kiln in Saint-Maurice-des-Carrières, his native village, and an article on a circus camped out in Brémondville. These reports are gradually invaded by fiction, by the illusions of childhood, dreams, entertainment, drugs, and death.

REVIEWS: “Pierre Turgeon’s second novel, One, Two, Three is a pivotal book that liquidates the introspective slope of the autobiographical narrative to lead to the phantasmagoria of the contemporary world. The rhythm of the narration is justified in the dizzying melee of a series of split figures: The world is governed by autonomous nightmares.” – Réjean Beaudouin, Books from here
“Pierre Turgeon’s work remains, here, singular: it must be approached almost without habits, a little like a non-figurative poem. These pages have the indefinable intensity of those of an André Pieyre de Mandiargues.” – Réginald Martel, La Presse 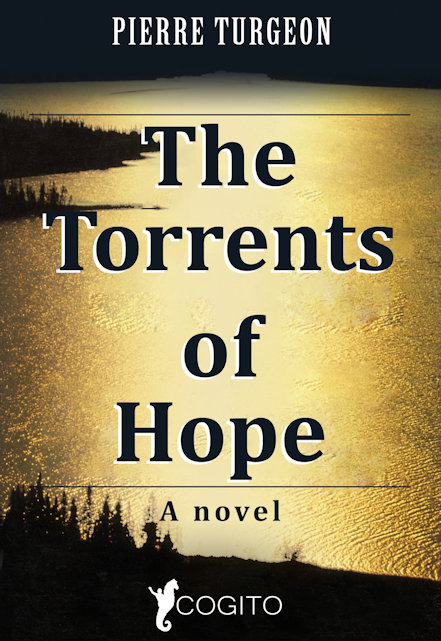 The Torrents of Hope Cogito, 2020 – La vallée du Richelieu, Bas-Canada, 1837. During a skirmish with soldiers of the British Empire, Stéphane Talbot’s father, an ardent Republican, disappears, leaving behind a distraught and penniless family – the family mill is in ruins – and a son animated by a ferocious hatred towards the English and especially towards Henry Blake, the officer responsible for this destruction. So Stéphane is not happy about the liaison between the Irish soldier Mervynn Parker and Catherine, his mother. Until the day Mervynn was sent to China with his regiment. Catherine, destitute, is forced to work as a maid while Stéphane joins the steamships of the St. Lawrence. During a stopover in Montreal, he meets Gustave Hamelin, an engineer who has just been hired by Henry Blake, Stéphane’s sworn enemy: he controls La Montreal Gas and Light. The two men come face to face… Les Torrents de l’espoir is a superb historical saga, full of breath and exoticism, written by one of Quebec’s best novelists, twice winner of the Governor General’s Award, the local Goncourt.

REVIEWS: “Pierre Turgeon has a passion for the past. Because he comes from Quebec City. Fasten your seatbelts, because you are going to travel. From the banks of the Jacques-Cartier River, in the prologue, through Grosse-Ile, Montreal and Dublin, from there to Crimea in China, Sudan, Egypt, all in less than 400 pages. Wars and water.” – Anne-Marie Voisard, Le Soleil.
“It is above all to history enthusiasts that Pierre Turgeon addresses in Les Torrents de l’espoir. What’s surprising, when you consider the obvious interest he has had in narrative with a historical content since his early days as a writer? Already, with Sweet Poison, he was already drawing on family annals. After dwelling on certain key events of the twentieth century – the rise of fascism in Hitler’s Boat, then the political situation in Quebec in the 1970s in Insurrection!, Turgeon took a great plunge into the past this time around, at the time of the Patriots’ rebellion. With its hectic rhythm and characters set in a harsh but captivating reality, Turgeon’s work is sure to enthrall those who like to let themselves be carried away by the images of a good story.” – Claude Dessurault, See Québec. 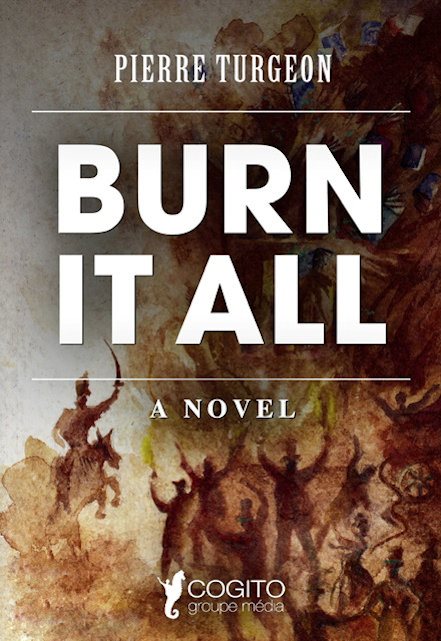 Burn it All Cogito, 2020 – On April 25, 1849, a serious threat hangs over Montreal, the capital of United Canada. As the government prepares to compensate French-Canadian victims of the 1837 Rebellion, Orangemen set fire to the Parliament Buildings and the 25,000 books of the National Library. Governor-General Elgin hesitated to launch the imperial army against his compatriots. With their murderous ambitions camouflaged behind this smokescreen, influential men attempt to seize the immense fortune of Henry Blake, the gas magnate, who is found murdered in his castle. The life of Marie-Violaine Blake, his young widow, and that of his father, the chief engineer Gustave Hamelin, are threatened. Stéphane Talbot, the heir to the Grand-Remous seigneury, will stop at nothing to save Marie-Violaine, his beloved. At the end of this day of fire, the story of the characters will have changed so unexpectedly that one must admit that one rarely receives one’s gift from Divine Providence, but rather, as the author writes, according to the tortuous ways of poetic justice.

REVIEWS: “At the end of this day of fire, the story of the characters will have changed so unexpectedly that one will have to admit that one rarely receives one’s gift from Divine Providence, but rather, as the author writes, according to the tortuous ways of poetic justice.” – Jean Chartier, le Devoir