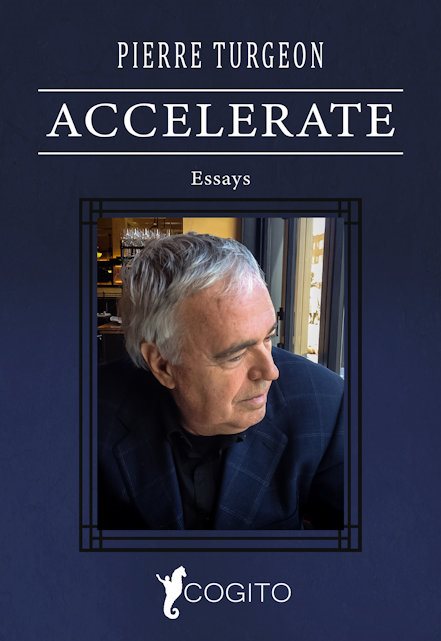 Accelerate Cogito, 2020 – Seven notebooks kept between 1968 and 1991, in which Pierre Turgeon explores his relationship to writing and absolute reality. Seven collected notebooks that go beyond the anecdote and the state of mind to take us, with the author, behind and beneath the scenes of the act of writing, into the identity of a writer-novelist-journalist, screenwriter-publisher. Pierre Turgeon describes the secret universe of his psyche, where fantasy and dream rub shoulders with freedom, dark and bright corners with places of creation. The spaces of the inner gaze are located in Greece, Paris, Mexico, Berlin, Montreal, Philadelphia. With each word, Turgeon plunges into the known and the unknown that defines him and that he explores through the writing of this essay.

The Company of Good Books Cogito, 2020 – The best way to renew the imagination of the Quebec novel is certainly to measure it against foreign literature. The Company of Good Books, in this sense, is an invitation to take to the open sea, without ever forgetting the native soil from which Pierre Turgeon takes off. As a keen reader of philosophy, he speaks of his affinity of heart and mind with prose from around the world. This book strikes with the clarity of its writing which, from the first sentence, enters right into the heart of the subject. From Homer to Heidegger, from the discovery of America to Habermas, the great adventure of the novel is inseparable from philosophy and narration, from discursive thought. It is the great story of shared love that Pierre Turgeon tells us at full speed, linking together the many literary relationships he has cultivated. The Company of Good Books is at once a collection of chronicles, a notebook of detached reflections and the itinerary of a novelist who reveals himself, through the originality of his approach, a writer furious with intelligence. REVIEW: “How and why is one a writer? Pierre Turgeon’s answer is quite simple: one writes to participate in the “communion of saints that a library constitutes” and because one wants to have “a place, after one’s death, among the dead”. Pierre Turgeon writes very well, without any pretension, with a very endearing mocking side. An elegant book, dandy, policed.” Jean Basile, Le Devoir. 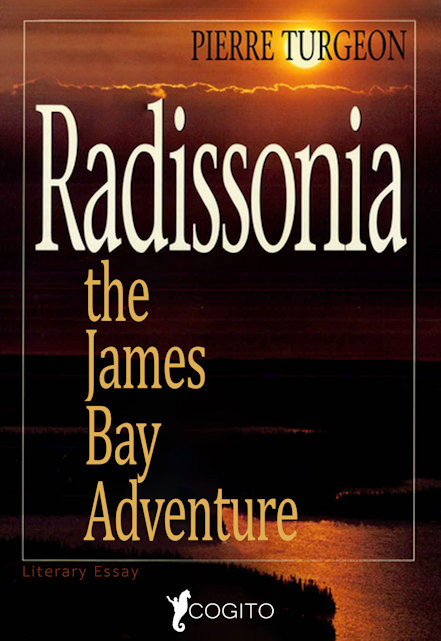 Radissonia: The James Bay Adventure Cogito, 2020 – (Governor General’s Award), Radissonia: The James Bay Adventure is a vast territory that stretches more than 700 kilometers inland. Bordered on the west by James Bay and Ontario, and on the east by the watershed between the James Bay and St. Lawrence River basins, the Radissonia stretches from south to north from the 49th to the 55th parallel. The energy heart of Quebec (the Radissonia already provides 17,745 megawatts of energy), this northern region is at the center of passionate ecological and political debates. While the future of Northern Quebec is a matter of concern for the population as a whole, it must be noted that people generally know little about this territory, the existence of which was neglected a few decades ago. This book attempts to fill this gap. Its author, Pierre Turgeon, imagined here a novel whose hero is a territory: the Radissonia. In the course of his story, we penetrate this new country established on the oldest land in the world. Going back in time, we learn that three billion years ago life was already clinging to this rocky ground. Then we spot the traces of the first human beings who came here five thousand years ago. We then explore this virgin land whose striking landscape we discover little by little. The flora, fauna, aquatic environment, climate, everything that makes it a place both dangerous and fascinating. This land of all extremes, with its rugged but breathtakingly beautiful landscapes, has not been immune to history despite its remoteness: its first inhabitants were engaged in trade with the southern Amerindians, it was at the center of the gigantic empire of the Hudson’s Bay Company during the fur trade era, and it is now an important source of electricity for all of Quebec. Today, two peoples and two cultures live side by side there, sometimes clashing. Will it be possible to find a compromise between the desires of the early Radissonians, who want to maintain their traditional way of life, and those of the modern Radissonians, who want to tame other rivers to generate thousands of additional megawatts? Once perceived as a barren and unproductive land, the Radissonia River today holds great promise for our future. This unique work invites us to discover it with all its contrasts. REVIEWS: “A report as rigorous as it is magnificent on the evolution of the relationship between the Whites and the Crees in the mythical territory of James Bay… An astonishingly clear book with a rigorous scientific synthesis.” – Louis-Georges Francoeur, Le Devoir – “What could be more American than a novel whose hero is a territory? What could be more American than to want to name the territory – and to want to make this naming the founding act of a legend, a fiction, a novel? This is what is fascinating about this book. Pierre Turgeon inscribes epics on the surface of the void, the poet walks behind the engineer” Jean Larose, Spirale.