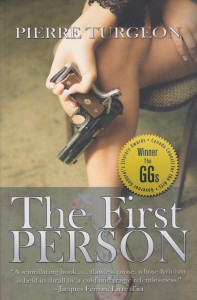 In The First Person, a disillusioned computer programmer working for the police has decided to erase his identity. We do not know why. Leaving his old life behind, the man becomes a private detective in Los Angeles under a new, forged identity. He is hired to find a local gangster’s unfaithful wife, but after locating the woman, he falls in love with her. The pair plans to reunite after he returns her and collects his fee, but their plans are shortcircuited by her husband, who punishes her cruelly for her betrayals. Devastated, the detective exacts his revenge. But soon, trapped by his own manipulations, he slowly falls into a mystic quest that redefines his selfimage and world view. Written in the first person, the book explores, through the main character’s eyes, his tortured mind, and depicts, with carefully chosen words, the emptiness of his existence and his lack of real emotion.The First Person has been critically praised as an account of one man’s systematic destruction of his own personality.
Review : Antonioni admirers take note –I admit that the most interesting thing I found about this book was the premise; a man, frustrated with his humdrum identity, assumes that of Mark Frechette. Frechette, as the novel reminds us, was the young male actor who starred in Antonioni’s ZABRISKIE POINT; he became somewhat of a revolutionary, or at the very least a criminal, after the making of the film, and was involved in bank holdups (sorry, don’t recall how many). He defended his actions in radical terms. He was arrested and sent to prison, where he tried to get several social programs going to better the life of inmates; he was a little more outspoken than was safe for him, and was eventually found murdered in a weight room. All this is true, and a rather fascinating bit of recent history, particularly in that the making of the film probably had a lot to do with Frechette’s choices in later life — life imitating art and all that. It’s even more interesting that someone should then, years later, write a novel that has its main character attempting to hide under Frechette’s name. The swapping-of-identity theme — man seeking freedom from his former self, while pursued by his family — is also, of course, familiar to Antonioni fans, as a device exploited very effectively in THE PASSENGER. Alas, now that I’m hungry to reexplore it, it’s out of print. I *think* other people would find it interesting, tho’… Y’gotta admit, the premise is quite something..-  Allan MacInnis - Amazon.com

Sweet Poison Oberon Press- 1982 – This is the story of the rise and fall of a middle-class family, destroyed by its legacy of greed and hatred. The hero survives only by learning the bitter truth about himself and his family.

Coming Soon Oberon Press- 1983 In Coming Soon, the focus of attention is political rather than social. A war film is being made on the streets of Montreal. But the events that take place – do they exist only on film or are they real? This is the central question of the novel, which gives an answer strong and clear enough to leave an indelible mark on its world, and on ours.